Daughter 4 and around the home

We fired Daughter 4. (her pic with her Jaxon )Well kind of... we paid her the last check we will be giving her to live on. All of us did a happy dance . We will do another happy dance in a year when she starts paying us back and again when she pays us off.  Out of 6 kids we have 3 that owes us money. Son 2 is already making monthly payments with an automatic deposit. Daughter 2 is barely making enough to keep the roof over her head along with Grandson (her youngest) being in his senior year. He is strongly thinking of going into robotic welding. 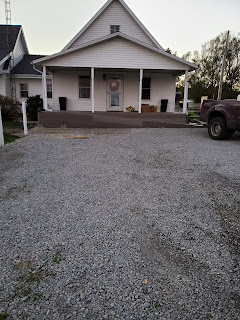 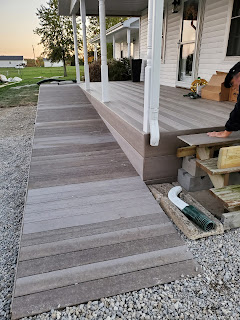 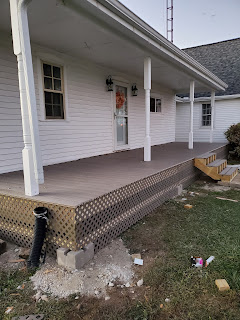 You can't tell there is a ramp on the front porch. We are still batting around color of railing. Both porches are done except for some odds and ends we will do ourselves next spring. Also paid in full as of this morning. We had a mess to clean up in the yard but it was easier for us to do as we keep a lot of stuff most would toss. I don't know how often we have needed 3 to 6 inches of wood for something and dug through the "lumber " section we have in the barn. Even E comes over now to see if we have something when he is only needing a small piece.

Spouting guy is coming today for finish that part. That will be paid in full also

Probably good we are stopping with outside projects until next spring with this cold drizzling rain we have had for the last couple days and today. 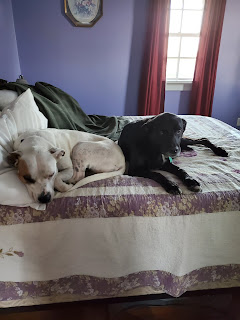 Rascal(black one and 11 yrs. old) woke us up at 5:30 am today having a seizure. Charlotte was right there with us holding him and trying to keep him calm through it. Cookie, one of our old dogs used to have seizures. He is doing good now. Rough way to start the day. Every time she goes past him she stops and smells him and then goes on.

I have an ear ache, used garlic oil ... my ear did the Mexican hat dance. Gland is swollen and I have a low grade fever. Took aspirin for fever, Vicks the gland and wrapped a towel around my neck. Hot tea with honey after I took my elderberry syrup. I really need to remember to wear something over my ears when I am outside in this type of weather. In this area, I am my mother's child. She always got ear aches and ear infections if she didn't wear a scarf. Fever broke quickly. Ear is no longer dancing and I feel a lot better.

We watched Charlie Brown Halloween on PBS. We got a kick out of it as it's been a couple decades since we have watched it.

This week in the pantry:

I roasted a pork butt roast, froze the leftover meat in meal servings size, made broth from the fat and bone. Canned 5 pints of pork broth and put the fat in the freezer.

I roasted a ham,(still want at least 1 for freezer ) froze the leftover meat in meal servings size, made broth from the fat and bone . Canned said broth and froze the fat.

I roasted a turkey for supper last night, will be freezing the leftover meat and making bone broth from it and freezing the fat after I put a casserole together of it for Monday.

Tonight is taco soup using stuff from the pantry and freezers. I am making enough for Sunday also. I gave him a choice of taco soup or chili (which is already canned). He chose Taco soup.

Hubby is now only drinking half a pot of coffee each day. I asked him why and he said I mentioned how his coffee is very seldom on sale( he drinks bold or French roast) and he uses two to three times as much as I do. GEEZE I should have said something sooner???  He is the one than makes the coffee in the morning, you would think it would click he was just turning mine on to reheat every other day while making a full pot for himself daily.

Daily I have started brewing a kettle of hot tea around 11 a.m.. When it gets down about half way I fill it back up with water using the same tea bag and bring it to a boil. We used family size tea bags with our kettle.

We had doctor appts so combined it with grocery shopping. M gave us her list. It took 3 stores to get everything. Two stores were half empty of food. The last one had some empty spots in every aisle. Could not find saltine crackers. Amish use them a lot. Family members that are in food service told us that even the restaurants are struggling to get them. I found a couple recipes that I will try.

After we dropped off M's stuff to her and I put our stuff away (still didn't find a red cabbage). Hubby announced he wanted the house stocked back up like I had it  before we supplied the kids for the pandemic.  Believe me, I ran to the computer, made 6 orders (ended up with $18 digital and 5 % cash back on what was through Amazon) before he could change his mind.  After I placed all the orders I asked why the change. He said he thought it would go back to the way it was, not maybe as many varieties of stuff but the basic stuff. Not being able to find saltines was what triggered it wasn't going to be back to normal between the pandemic and the drought in areas.

He EVEN ORDERED a fitness tracker as he knows during the cold months he does not get the exercise like he does in the warm months of pushing the push mower around garden boxes and unloading produce at the auction. Doc has mentioned it more than once he should have SOMETHING to track his movement. He didn't even argue with me when I told him to ordered a protector and extra bands for it.

I need to update the to do list and think about meals as of Monday Nano (National Novel writing month 50,000 words Nov 1st to 30th... https://nanowrimo.org/ )