This and that... saving electric/ mice control etc. 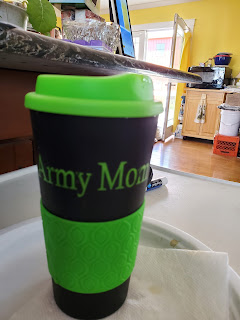 I am facing retirement LOL... Son 2 has put in his retirement package and just went to the range for the last time. He doesn't think they will send him to annual training. He is hoping to get completely out (normal time out date is 6 months from putting in package) in Sept when he turns 40s. 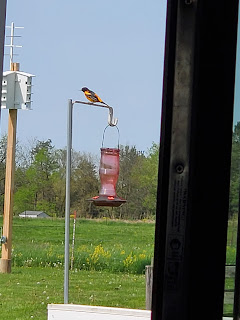 First time we have had a Baltimore oriole here. This is a male, the female flew before Hubby could get his phone out. Hummingbird was not happy he was sitting there.

I was asked about storing winter clothes in our barn and mice. One we use Rubber Maid containers that mice are not fond of eating through. Two we have a gizmo called Pest Repeller (Amazon) that have worked wonders. I have noticed hawks and Amish barn cats visit our barn off and on in the back stalls where the horses used to be kept when this was owned by Amish. Off season items are in barn enclosed loft.

Cutting the electric...Hubby asked how I did this also. It's little things

I unplugged all extension cords that had stuff on it but not being used  and power strips that have a on button light that not being use.

Full freezers and not packed to the gills refrigerators do better energy wise.

I unplugged the DVD player in the front room (I would not turn off or unplug cable box or phone modem, most updates are during the night)

I unplugged cell phone charger station and got in the routine of charging the cell phone while watching the news and not leaving it charging over night anywhere. Hubby has started charging his when hauling and only charging in the house when he doesn't haul which is usually Sunday and Tuesday.

I put the second tv, radio, my laptop etc. on a power strip (that does not have a on button light) and turn it off when not using.

We turn the coffee pots warming plates off (yes, pots as we don't drink the same strength of coffee) after second cup of coffee. Hubby cut his coffee consumption in half so that cut that power in half since he is only brewing every other day instead of daily. We don't have issues with leftover coffee. That also cut the amount of coffee having to buy.

I cut the amount of from 4 to 1on night lights ,even though I am using holiday candles that use LED lights. I don't close the curtains completely on the side of the house the security light is. It helps as a night light.

I turned the furnace down, it's propane but has electrotonic ignition so  it's not coming on as much. I stopped turning on the water with my left hand... that's the hot water and 9 times out of 10 I wasn't needing hot water. Propane instant ready water heater , still electrotonic ignition plus it would pull propane. Saving the propane also. In the past week we have used less than 1% propane.

I put the radio in the barn on a timer other wise all sorts of lights flicker on it while plugged in  and Hubby doesn't think to unplug it or turn the power strip off... pretty electric vampire is what son 2 called it and since it was HIS , he should know.

I told Hubby that within 30 mins. of him getting in his recliner to sleep that he is passed out. I've turned off light by him and tv several times. So now he is trying to set the tv to go off in 30 mins. instead of the 90 mins he was doing and turn off the light as soon as he is done setting the timer.