Charlotte and blur of week 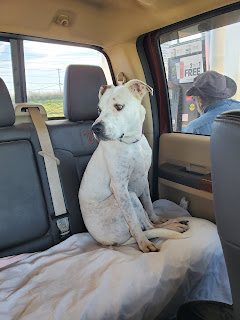 She wasn't sure what to do with the whole seat to herself as she usually sits on my lap or gets crammed into a corner as the boys always stretched out.

We have found she is a quiet dog , like Wilbur, that was barking because Rascal was up barking and checking things out. She will bark at Pepper (E's dog) and Betty ( Jan's dog when they walk pass on their daily walks). But there is silence when the school bus and buggies go by. She does more looking out the windows than running to the door.

She must have been taking the balls to get Rascal to play with her as I barely can get her to play with me and them. She will walk part way of the perimeter (like Wilbur did). 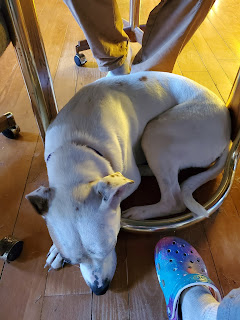 She was doing this before while we ate, I was surprised Hubby allowed it. Now she sometimes just sits there facing him while we eat. He won't let her put her head on his chair or lap. With his tremors he does drop food. But she waits until he tells it okay to get it. Rascal would wait also. Wilbur would not wait a freaking second.

She finally is sleeping again at night. Hubby said she only got him up once and it was before midnight. He went to sleep at 7:30. I warned him this morning that would be 6:30 next week. We have talked about getting another dog, not a puppy as I don't think she would do well with a pup. I definitely said spring unless she got so depressed like Tashy did when Tubby died. She's eating normal already, definitely still is got the routine of last potty before bed and then treats still. But the care free puppy is gone. She looked older after Wilbur died, she looks even older now. Grief does that.

Our apple tree we were told when we bought the house wasn't very good. I even said we would cut down this year because it didn't make apples at all or not very big ones. IT RAN US OVER with apples. Even M was ran over and there are still apples on the tree. I will try to pick more for fresh eating as I am done with canning.

I froze all the fat. Still have to cut the turkey fat into cubes to bag.

I got my restock order from Amazon. They screwed up and doubled the one order. They aren't charging me since it was the warehouse's mistake.

Hubby got his hearing aid replaced. They are only a couple months old but it wouldn't connect to the app on the phone. The owner is his hearing guy and flat out said to Hubby that he was sending it back and requesting a NEW replacement not a repair. Actually got it within 2 weeks. I was noticing he was getting confused with only 1 hearing aid. He said something to the doctor about it and it was his "bad" ear was the one without a hearing aid so he wasn't getting all the information he should of to make decisions. Which is why he went and got hearing aids to begin with SIGH.

Canner about done with the last of the broth. I need to go pick apples also.