Back in the old days 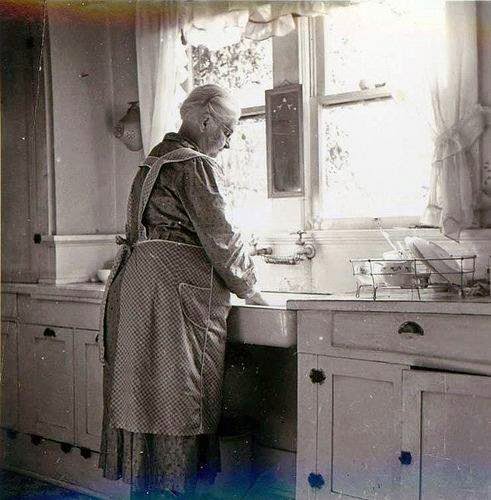 of my childhood...this kitchen picture was close to what my Mother's uncle had built in the home we lived in except we had a cabinet under the sink and the top cabinets didn't come all the way down to the counter. The apron was one like my great-uncle's mother-in-law from Italy wore. She insisted I call her Nonna and tell people I was her granddaughter. I didn't have any problem with that at all as I spent as much time as I could with her and my great-aunt and her sister.

Even though money was extremely tight, Mother was not frugal in the kitchen. The only casseroles she ever made was tuna noodle and scalloped potatoes and ham. The only soups was bean soup and chili made with hamburger. There was always a piece of meat, (Dad hunted and fished or there was no meat), potatoes, usually fried, two veggies that had been canned from our garden or that someone gave us that Mother canned if the garden wasn't producing. There was store bought bread and real butter, maybe pudding if the farm that my brother worked at gave us milk or jello. Fruit was only in season and what ever was in the neighborhood. Christmas gifts was an orange. I remember the first time Dad bought meat at the local grocery that had a butcher cut the meat right there. It was t-bone steak, one for each of us. My brother had gotten accepted to a private college, received a scholarship for playing football and Dad had just made the payment for his freshman year. We celebrated with that steak on the grill, we had baked potato with sour cream and butter and a tossed salad and corn on the cob. I didn't see that meal on our table again until my brother graduated from college four years later.

Why the thought of that time? Because I need to cut the budget to make the bills that have came with taking on a grandson to raise and preparing for a winter that they are forecasting to be just like last year...below zero and lots of snow. I am also dealing with losing the deep freezer and all the food that was in it.

So I have accepted Mary's challenge over at www.owlhaven.net/2014/08/29/join-my-spending-challenge. I plan to spend half of what we have been averaging for the months since there is now 3 of us for the month of September. I am hoping for less but the goal is NO MORE than $350 for food and non-food.

Have a blessed day