Frugal things I did last week

because most of December was making theses 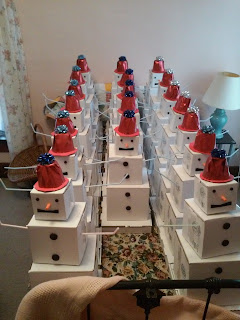 Twenty five of them later with my tears of frustrations on the last 3, you would think by then I would have had it down pat. All filled with packing pellets AKA snowman poop and 10 gag gifts with a small amt of cash. Then after delivery I pulled my groin muscle and that strained my adductor muscle I already have a bad back and struggle with leg pain because of it and then if that wasn't enough I caught the crud...you know the crap between the head cold and chest cold but won't go away but you are thankful you didn't get the stomach crap that was going around ..yeah that crud.

I sliced up what was left from the prime rib that I roasted for the holiday and now have some for a couple quick sandwiches and some for soup in the freezer.

I found mild sausage and hot sausage on sale so bought that and cooked it and strained the fat in to pint jars. Meat will be for casseroles, omelets , quiches, pizzas and calzones among other things. It went in the freezer in 1 cup servings (sandwich bags work well and then put in a freezer bag). Fat is in the frig.

I found hamburger on sale, made some in to patties so I don't have the excuse we can't have hamburgers because I forgot to thaw them, and cooked the rest with some water (trick learned when I cooked in a day care to make the meat less greasy), strained the water off and cooled it and took the fat off it for the freezer also.

Milk gravy tastes better if you use a favored fat to make it with.

I made a point of not turning the Christmas lights on during the day until Christmas eve and Christmas day.