What a month April was..what I did frugal 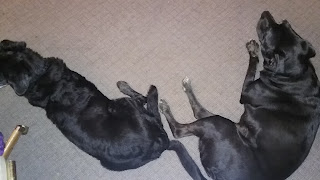 Miss Kira( about 100 yrs old doggy years) on the left and Rascal (a bit over 28 yrs in dogs years) on the right have had me up all night several times this month with the storms and winds that have went through.She doesn't like her picture taken and usually does a better job of moving before I click my camera. I've learned if I want ANY sleep to sleep on the floor in the front room. She doesn't want us in the bedroom since that's the wall that takes the hit from the winds during storms. AND she wants me on the floor where both of them can lay next to me instead of the couch where one of them is going to end up still on the floor. I have taken to laying the cushions for the lawn chairs on the floor and top with thick blankets for my bedroll.

One of landlord's sons rolled our yard for free since we help with the cattle without pay that they keep in the barn behind us. The other one brought a couple piglets in and I mentioned I wished he had said something and I would have had him bring me in one also. He mentioned cost and I mentioned I pay for the electric to run the pump for the water the cattle drink...he was shocked...he thought the water pump was on the barn meter he pays LOL.I doubt if he will bring me a piglet though.

We lost our internet and home phone service for almost 2 weeks( phone company gave us credit) and the cells stopped working right for a couple days during the same time.

I went in the ER (Crohns) and then spent a week pretty much down on the couch.

Add in doctor appts, lab work, house hunting for when Hubby retires, Produce auction (nothing we wanted) community yard sale in the pouring rain(prices were slashed half off the first day with the rain that was coming in all weekend) and Hubby going to the retirement meeting to start the process of retiring out. AND a load to the thrift shop as I sort through what we want from what we kept in case we or one of the kids needed.I also took my car to my youngest to use while she tries to find a car she can afford as the one she was suppose to buy needed more work than the seller had mentioned. Probably because she's female thinking she didn't know what a timing chain was and knew what it meant to replace it.

We combined errands with chiro,doc appts and lab work. We even combined looking at houses while going over to the produce auction and coming back and when we took my car to the daughter and when we saw our parents (2 trips).

We used Wagner pts,Kroger pts and Speedway fuel card to keep the gas cost down while searching for lowest gas using Gasbuddy

I used my garage sale list for the yard sales I went to and didn't buy the "pretties" that I would have.

We had a freeze come through again and luckily I saw the forecast for it to be around 40° and left the straw on so we didn't lose anything. We might have lost the strawberries as Hubby put too much straw and too tight on them. I have them uncovered so we will just have to wait and see. The other box is fine and I found some on sale to fill in on sale. I have now removed the straw and put it in the north garden between the straw bale garden on the foot path part.

We ate out with friends and used 50% off coupon for the whole table. 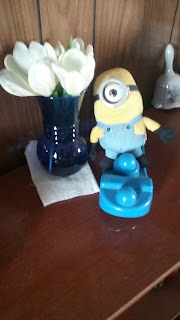 I picked flowers several times for the house.Spring flowers are pretty much over and my lavender is just starting to bloom.

Hubby and I have done some activities that earns us points for our ins.. his ins for next yr is FREE and mine as his spouse is $1.50 a week. (yes we know we are lucky) PLUS his company gave us each $50 Amazon card ...when we max out our pts ( probably in a month) we each will get $100 Amazon card

I cashed in my points from Swagbucks and Pinecone research.I used coupons and mailed in rebates for things we bought this month.

We have been graphing my sugar and when I was in the office for follow up from the ER Doc moved my lab work and appt up since my sugar is rebounding and I have proof of it... goes low and then immediately goes high again. He is thinking more of Crohn's instead of the steroids...not what I wanted to hear.BUT at this point it's hard for him to tell since I am on steroids AGAIN for the Crohn's attack I had.IF my A1C is above 6.0 a second time,our ins will pay for test strips for me.If it's down I won't have to test any more.

I did the wash in tap water cold,short wash, double spin(cheaper to spin on 110 than dry longer on 220)

I used the clothesline...and ended up rewashing the same load 3 times when the wind kept blowing it off even with more pins on each item thankfully the straw bale garden caught them and I didn't have to chase it to the neighbors 1/2 mile away .... so I used the drying rack and sensor on the dryer to dry the clothes. Electric bill dropped $15 this month.Even with using the same amt of electric as last yr. Our landlord checks for lowest prices all the time for electric and propane.

I changed the pattern of the afghan I am making my great grandson so I wouldn't have to buy more yarn.

Miss Kira still goes on the shock collar when the wind is blowing, rain or storms. Hubby let her out the other day without it while I was at the doctor's office and the landlord's son called me to let me know she was at his parents house  and looking to head beyond that (their property is at the end of the range of our shocker)and I let him know Hubby was home but had no truck to go get her. Texted Hubby and he realized he had let her out without the collar so he couldn't even shock her to get her to stop and come back so he texted the landlord's son who went out and yelled at her to GO HOME and slapped his hands together so she pranced her way across the hay field and got met by one ticked off Daddy I am not sure who he was ticked off more at her for not staying in the perimeter or him for forgetting to put the collar on her. LOL

I've kept used coffee grounds for the tomato plants I will be putting in with in the next couple weeks.

I've saved my change, $1 and $5s for our savings.I didn't use all the grocery money this month and even with eating out more than we planned I had money left in that acct also so we put it together with some money we got refunded (over paid bill that ins finally paid) and bought a new...brand new push...excuse me...walk behind self propelled electric start lawnmower that mulches, bags or does normal mowing.It's a Toro with a 5 yr warranty. It's also what the guy that routinely fixes our mowers told me to get and it was on sale and he used his discount on top of the sale since his brother owns the store LOL. I used it today and it was great.We will still have to weed eat around things but not like we have and I won't have so much grass blown into my sq ft gardens.

We checked out Hubby's dad's old truck that he was going to put up for sale and decided we would buy it, It's a small truck, not full size like we have,so the gas mileage will be better plus Hubby can drive it back and forth to work when he doesn't take the bike or I can drive it instead of my Ford SUV that eats gas also. Our ins guy looked over our policy and thinks it will costs about $20 more after he adjust the other truck as pleasure and takes full coverage off the ford. Hubby's dad took it in to get a full check up and do some repairs and maintenance on it. We will still have our mechanic check it out before we drive it too much.I can guess it's going to need tires as no one can remember when the tires were replaced.