first 8 days of May

We celebrated with my Dad that turned 90. Took him to Bob Evans and which point about at the halfway point of my eating my meal he leaned over and told me I had ate enough and to box up the rest. He didn't forget that the last time we went out to eat I told him instead of being quiet about me eating too much or the wrong thing to tell me, to share his wisdom of being a diabetic for 30 yrs and still only taking 1/2 of a metaformin daily to control it. I was a good day as he walked through his "memory lane" while showing me the items he wanted to share the story about in his home. 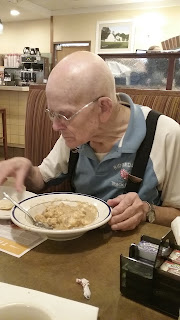 His love of sausage gravy and biscuits continues through down to his great grandkids and most likely will another generation as the great great grandson is starting to reach the stage of being able to eat soft foods.

We did a stop by a viewing of a classmate and nephew of a old childhood friend of mine...very sad.
Triggered some of the old feelings of when I lost my late husband.

Then we can home to this 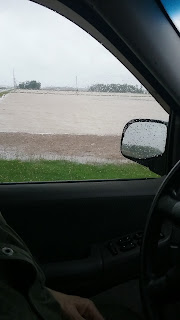 Right to our driveway,, grass was  a tiny strip on this side, no grass on the other side and it only got worse before it got better.

THEN there was a FREEZE... I'm not sure if the peas and spring crops made it yet as we have another cold morning tomorrow before it starting warming back up. I did cover up what I could.

We flopped the truck with daughter as she has my car to go get Dad as he can't get in the truck. Cheaper to flop than to rent a car, she did say if we sold her the car she was willing to flop it with us to go get him instead of us buying a car that I won't drive all that much. We will see.

We ate from the pantry through the week and then ate out most of the weekend. Got a Philly cheese steak pizza and chef salad that feed us 3 meals over the weekend.I'm not going to crab about it with how the days have been rolling.

Lawn is mowed but the trimmer was broke and Hubby couldn't fix it so a friend did. I got it back today.

I've been sorting through the farrowing house that has became our storage unit... Took 2 loads already to the thrift shop and have another one loaded to go tomorrow.

I made a list of the breads etc that we like and want me to start baking... AND I listed the time that was needed to do so so it's not "Oh let's have this bread" and then realise it uses a starter that need began the day before or it's something that takes 4 hrs. I did tell Hubby if it's a 4 hr bread I could start it before I started supper and it would be done before I went to bed. We will see.
Posted by Chef Owings at 3:22 PM