Frugal in the kitchen (small 209 update)

209 update... they are have primered the entire 1st floor and the only thing left to primer is the door to the lofts in the kitchen and that stairwell. The ODOR takes my breath away so I won't be in the house much when over there. Ceiling is suppose to be done next. Head contractor was hunting down my kitchen cabinets that hadn't came in Wednesday like they were suppose to.

I bought  3 thin steaks that were marked down, marinaded them in coke a cola and then sliced thin with bell peppers, onions and mushrooms for a Philly steak sub one night, stir fry the second night and the next will be a soup as what I trimmed from the steaks I simmered and then strained for broth. That's for tomorrow night and I might add a can of black beans to it if it seems on the thin side of soup.

I bought a pork loin and was going to cut 4 pork chops from for tonight's dinner, and put  what is left of the loin will go in the crock pot on Wed. When I opened the package I found it smelled horrible and immediately called the store as it was NOT expired. They credited me for the cost and added a bit more for the inconvenience. So Hubby dug through the kitchen frig while I dealt with that and pulled out the 2 hamburgers I have cooked last week to go with mac and cheese and a veggie along with the last of the strawberries I picked from 209.

My niece that just graduated was telling me at her party that she takes either left over chicken or pork and shredded it to put over tortilla chips with nacho cheese (optional lettuce, onions and tomatoes) for a quick meal. She has taken over the kitchen a lot since she was looking at going to college out of state , her parents insisted she know how to cook from scratch and run a budget for a home. She is staying at home for the next year as she took college classes during high school and found she can get her BA degree in a year if she stays in the same college. She is in robotics and has already done some work for a local company that offered to hire her but wasn't willing to work with her going to school like she wanted. Felt at this stage of the game remaining at the job she is working at and living at home and attending school full time on a scholarships and grants was smarter.

I cleaned out Baby, the 7 cu ft deep freezer. We are completely out of corn...sigh.That's a good 6 wks. away of being in. We need NO bacon, bulk or smoked sausage or ham bones or peas/peas and carrots. I've yet to figure out why there was 4 wadded up brown grocery bags and an empty box at the bottom of that freezer.

We started cleaning the pantry, one it's over due and two is to see what I must can or what we need to eat up and not get any more of. I acknowledged that I did can an "extra year's" worth to cover us this fall because I figured we wouldn't have a garden with planning to move... I didn't plan on us to almost stop eating from the pantry.I have a good 6 months extra in most things that I shouldn't have. 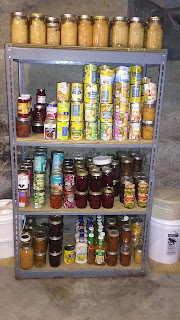 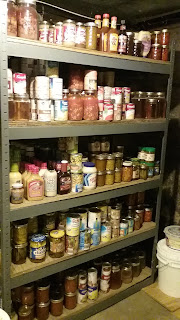 I have 11 of these units.Three of these units have dry goods or store bought can goods that I just got for the "tornado" season that has arrived. So they were easy to straighten and check if everything was good.

I went through 5 of them today checking lids on the home canned jars and  moving the oldest to the front so it's used up and what needed tossed.

I also noted what we were not eating... dill pickles and hot salsa that only Hubby eats and must have stopped completely (it's his middle of the night when he used to eat lunch snack). Fruit... makes me scratch my head over that overage.Hubby used to drink 1 gal. of juice a week and now it's maybe 1 qrt. a week if that. We haven't been eating pancakes,waffles and French toast on a regular bases and it shows in the amount of different syrups and pie fillings I have on hand. I didn't bake pies last Tday dinner or cakes  or at Christmas and that shows by the abundance also.We need to eat at least 24 qrts. of chunky applesauce before apple season. Or I won't be canning any of that either.

If I only use spaghetti sauce (red sauce here as my Nonna was Italian and from the old country) every  3rd week we will make it until tomatoes are on again to make sauce with.  I don't need to make pizza sauce, enchilada sauce or tomato juice this year. Diced tomatoes if I have enough tomatoes for sauce will be wanted.

I have enough veggie soup, chicken potpie filling, canned turkey and canned  broth for this year until after Tday. Since we aren't doing much of a garden I might have room in the freezers to put the broth instead of canning it.

SO my thoughts on this line is .... everyday cottage cheese , applesauce (Hubby only eats cottage cheese with fruit on it), dill pickles and beets on the table.

EVERY NIGHT 2 jars/cans of fruit and 2-3 jars of veggies need to be brought up for meals the next day.

Let's see how that one works.