memories of late Husband, table up

When Garry and I got married, he bought me an old tiger oak (veneer) table that would seat all us.  He would not let me put it up in the rental as we were starting to work on the one step above condemned house we bought.

Then his daughter and I moved everything into that home even though it was not anywhere near finished, no running water in kitchen , okay no kitchen as half the floor had fell through to the basement. We both understood it would take years, did not need to be paying rent and mortgage and her and I could handle it with the little ones. He flipped but too late as we rented from his uncle who backed us so much he rented the furniture truck and drove it himself.

He still insisted the table not go up until he got the dining room done. He was down to redoing the floor when he dropped dead at work at the age of 39 of a massive heart attack ... inherited from his father's side as we learned later.

I put the table up that very night. Told my mother and kids to NEVER wait to enjoy stuff. Every day life is a special occasion.

When we moved out of the old home I left the table for Daughter 3 who had her 4 boys and her man's 3 girls. She passed it back when she became homeless (spent $2000 on Christmas but did not pay her rent. Not sure she learned the lesson but her boys definitely did when their friends had to take them in). It's been in storage for six years.

I saw it in the barn and told Hubby I wanted in the house. He was fine with that. The veneer is coming loose and one leg needs reglued but Hubby already said something to H who repairs and builds furniture and he said to mention it again after Christmas and he would work it in his schedule to repair it. Right now H is doing Son 2 cabinet that was Mother's that fell apart. 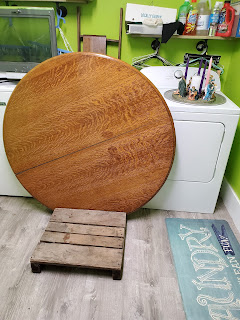 I used Howard's restore for golden oak and the applied Howard's bee's wax and let it sit here as this is the warmest room in the house. Was not much "oily" feel next morning. Wiped off and took it to the dining room, 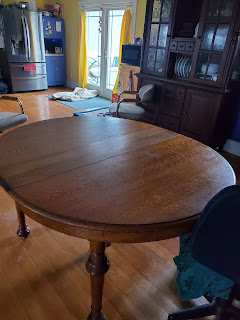 And then had to find a chair I could sit in and not have my chin to the table. I used the computer chair for a couple hours and then Son 2 reminded me the chairs he gave me when I lived on 245 fit the table and they were upstairs in the sewing room. I brought one down. If his lady comes to eat, I will have him go get the other one (he only had 2 chairs) as she is small as me.

I put the table cloth (folded in half as it was for this table at full 8 ft) on it, Hubby put the oil lamp on cake stand and the tempered glass I have the candle, butter, salt and pepper on (that gets moved if I need to put a hot plate on the table) back on the table. When we sat down to eat he mentioned he didn't realize how crowd the other table was  until then.

If I hadn't seen the blanket while looking for other stuff I would not had realized we still had the table. I thought it had went back to her. Even texted her to confirm we were keeping it.

ANYWAYS, it was a nice ending to a whacked out week.