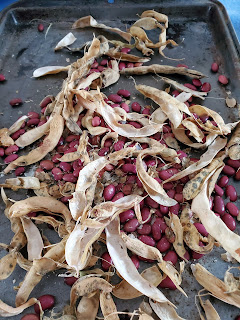 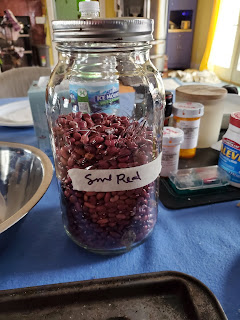 The small red beans did very well this year. Baby lima, dark red kidney, navy and Cherokee Trail of tears weren't not as good. There are 4 more varieties to shell. I had 9 varieties.

I have 21 more "sitting work" on my to do list to cover the next 5 weeks that I am still doing PT. That's 4.2 things a week and right now the day after PT is NOTHING getting done except me hobbling around whining after a night of only 2 hrs sleep. I have asked the kids for cheese and bread sticks but Hubby was the one that got me cheesy bread sticks LOL.

He bought calzones and cheese bread sticks...not sure if that was to stop the whining or because he was tired of reheating stuff after HIS WHINING. He also came home with Arby's but that was because he was running about 2 hrs later than planned and didn't thaw anything for that day. He has been making sure he has something out the night before for right now.

We pull out of the punch list. There is 8 things needing done, 6 of them are outside and will depending on the weather.

Hubby goes back to work starting Saturday. I am more than ready to have him out of the house during the day