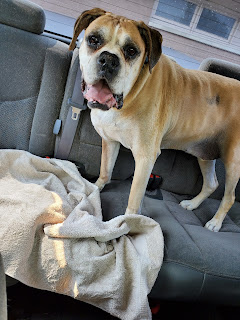 He still has symptoms of bronchitis but his lungs (and heart) are clear. So Vet is thinking non bacterial as neither of the other dogs are sick. Meaning... he was breathing something that caused it... like the hazy smoke in the skies or the chemical spray the English farmer across the road sprayed. So another med was added to the first one since he is better but not well and still has next to no voice. At 87 lbs. he looks thin to us *he's always weighed around 95-100 and that was down 50 lbs. from living with Daughter 2* but the vet said that is his healthy weight especially for being 13 yrs only which is also not usual for his breed.

He likes the one med... I have to hide the other one in a vitamin *which I get for meds only* but I have to give it to him in the morning as this med might cause him to potty in house.

He is eating decent and willing to walk part way around the perimeter with me once a day.

A complete change from last Tuesday when we thought we were losing him. Now if he got his energy back (better but not good) and his voice. I would be happier.