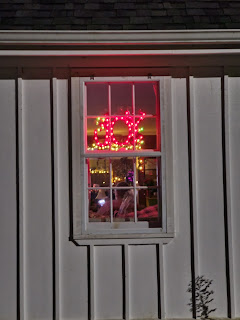 It feels weird to not be figuring out how to get the canning done or what needs canned first LOL.

I did get most the Christmas cards ready to go out tomorrow, I have 5 that I want to include letter in.

Hubby spent the day working on the solar pump for the deep water well. He got the hand pump attached which is the most labor but still needs to install the solar panels and the batteries.

Thought it was kind of funny the morning before he started on it we lost power and my first comment was I have no water to do laundry. I have water for 3 days for regular uses but that wasn't the point when the solar pump had been on site for a month. He immediately went to install it. Did not think it would take more than a couple hours to do it completely but if necessary he can hand pump water. I grew up doing that at my grandfather's and aunts... 860 pumps with a hand pump for a wringer washer and rinse pan.  (UPDATE) he found it was going to be harder to install solar panels as he thought they went one way narrow side as side and longer side as height and it was the reverse. E is going to help him install them after he braces the walls they will hang on the pump house.) AND the electric went out 6 hrs... not big deal as I had already pulled water for the morning and just put off laundry until the next day.

We are changing the times we eat since Hubby is not hauling as much (slow season) plus he needs a snack around 7 pm or he munches through way too much (1/2 gallon of caramel popcorn that was suppose to be for me and I got none of it). I made the mistake of suggesting cheese and crackers... he ate a pound of each SIGH.... and he realized that wasn't good when the next day Doc was on him for gaining 6  lbs. in 3 months when it took him 9 months to lose it to begin with.

I eat at 10 and 2 and eat light meals or snacks and dinner (supper) was at 5. Hubby wants to eat dinner/supper at 4 to 4:30 and have a snack at 7 as he is usually asleep by 8:30. I think the oatmeal bars I used to make for the kids' breakfast would be a good snack for him at night. Since he told Doc he was getting hungry a couple hours after eating supper. I just have to make sure he doesn't munch through them like he did the caramel popcorn. He drinks over 1 gallon of water a day not including his 20 ounces of coffee or 20 ounces of dandelion tea (for his gout).

We went and got fuel additive for the generators , lawn mowers , tractor and both trucks. When it clicked none of that was written in the budget... nor was the fuel for the tractor, lawnmowers or generators... SIGH. Nor was the grandkids moving out on their own money that we give them. Back to redoing that budget.

We haven't had sunshine for almost a week. Drizzle , foggy  and dreary.

The sun came out but the wind was above 25 mph. Charlotte doesn't like wind in her ears but wanted the sunshine. Kept going out , getting in her chair and then coming right back in . So I moved the dog bed into the sunshine 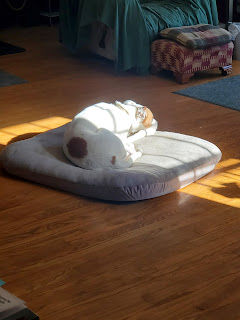 I spent the day , moving the bed with her on it to keep her in the sunshine. Hubby just laughed.

Hope you are well and safe